skip to main | skip to sidebar

As most of you know, after 32 years of directing the Weibel Chess program I announced I would retire a month or so before the pandemic hit. I had hoped a committee of parents would continue Weibel Chess following the same principles, vision, and mission. Sadly, for reasons that would take too long to discuss this could not come to pass.

Finally, the Weibel Principal gave Bay Area Chess (BAC) permission to start a chess program again at Weibel that could not be connected to the school as Weibel Chess had been. On February 4 BAC started up chess in three classrooms on Friday afternoons. Salman Azhar, the founder and Chair of BAC, son did attend Weibel for a couple of years, Aamir Azhar in 2004 won the CalChess State Championship. The family moved from Weibel, but the school has always been in Salman’s heart. BAC hired four former Weibel Chess instructors to teach the classes at the school along with a fifth individual. The four are, Grand Master Enrico Sevilliano, Jason Cruz, Jenny Ly and Bada Norovasambu.

In 2007, Salman Azhar took over the CalChess State Championships that I had been running. His Bay Area Chess continues to organize that prestigious and large event. A bit under 20 Weibel students attended the 47th year of the Championships this last weekend, March 19 & 20, 2022. In recent years Weibel Chess had 80 to 100 attendees. Yet, considering the very recent start of chess again at Weibel that was a good turnout. More exciting was how well they did.

As indicated on my Weibel Chess webpage and the back of the T-shirts the players wore, Weibel Chess had won a division in a CalChess sponsored event since 1990. CalChess is the Northern California affiliate of United States Chess Federation. Just a month before my program of Weibel Chess closed its doors for good on March 13, 2020, we won a few sections in a CalChess Girls State Championships. There were no face to face CalChess tournaments in 2021. At the reopening of a CalChess Scholastic Championships with numerous subdivisions students from Weibel proved their nettle once again and kept Weibel’s chess winning streak alive. Most of the students were in the BAC Weibel classes.

The Weibel Teams took first places in the K-3 Beginner and K-3 Junior Varsity sections. NOTE: Only the winners of the Champions sections can be officially referred to as Champions. For some reason most of the top players at Weibel did not attend. For me, as an outsider now, the best news was that girls were the leading players in the two sections Weibel chess students won. Hopefully BAC will be willing to encouraging them to attend the All-Girls Chess National Championships in Chicago in future years and send along a coach. Weibel has won eight All-Girls National Chess since 2011.

Kudos to the following Weibel students at the States:

Team winners – the points of the top four players count for the team. There were five rounds.

K-3 Junior Varsity
Anenya Balakrishnan 4.5 (Anenya also took first place an amazing accomplishment for a young girl that when Weibel Chess closed down was in our Raw Beginners class under the excellent instruction of Amy Chan.)

Adrika Kashyap 3.0 (Adrika also competed the next day in the K-5 JV. She joined because Weibel only had three players and she wanted to help the team. Much to her surprise two of the Weibel players dropped out.)

If you want information about chess at Weibel please contact the Director of Bay Area Chess, James Bethany, James@BayAreaChess.com.

I am not connected to their chess program so I cannot provide you with any information or direction. The Weibel Chess Website, the Facebook page and the blog will remain up as an historical memory of the past and anything I decide I want to celebrate about chess at Weibel. Two of my three boys attended Weibel in the beginning of the school and my chess program under the auspices of the PTA and then the PTO existed for 32 years. The umbilical cord has been severed, but a part of my heart is still there with the students, parents, teachers an staff. Salman Azhar and Minanshu Jha (Adrika Kashyap’s mother) provided me with the photos of the winning Weibel Teams. I did attend for a short period of time on Saturday afternoon to watch my grandson competing in the K5 Championship and the K5 Blitz. He had a very poor showing in the K5 Championship but did win the K5 Blitz. That is exactly what I predicted to one coach before the event for he and his dad play blitz most of the time with his Dad playing 1 minute against Elizur’s 5 minutes. As I walked into the Blitz area, they were giving out the trophies and Tom Langland, one of the Chief Tournament Directors told me that Weibel won the K3 JV and they were presenting the awards. He asked if I was going to go up with them for a photo. I simply replied, “No, it is not my program anymore.” I did rush over and shoulder my way through the crown and got one photo with other parents’ hands in it. 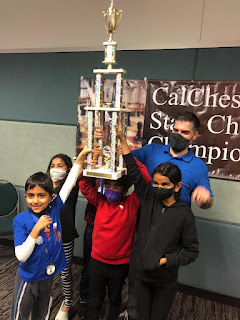 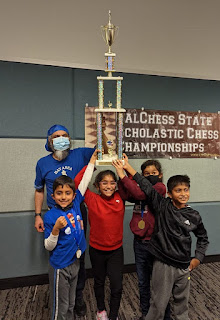 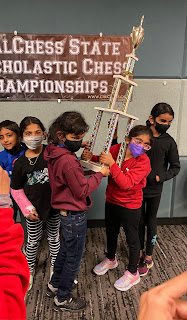 WEIBEL CHESS OF YESTERYEAR HAS CEASED TO EXIST!

I regret to report that the 32 years of Weibel Chess as both an educational, recreational and a competitive program has come to an end. My belief that the program would continue with a semblance of the 32-year history I established will not occur. Due to changes in the Fremont Unified School District’s facilities process and a loss of enthusiasm at the school office the hopes I had along with the parent committee have been dashed. I am sure that sometime in the future Weibel Elementary School will have chess taught after school through one of the many chess businesses in the Bay Area. However, I do not believe it will be “Weibel Chess” for these companies, while teaching the basics of chess, are in the end a chess business not a chess school program.
at 5:28 PM No comments:

Earlier today, on an exchange on critical thinking, a friend stated that to learn critical thinking people should learn chess. The comment provided me an opportunity to explain my view on chess teaching and critical thinking. This has been the foundation of Weibel Chess in the past and I hope it will remain the teaching philosophy in the future as I leave the program. Here is what I wrote with a couple of edits: Yes, only if they have an instructor that is interacting with the students and not just talking to the Demo board. As I said earlier, critical thinking isn't taught it is experienced and demands interaction and challenges--thinking about what you are thinking while you are thinking. While chess demands critical thinking, I would also say, that a fair number of the better chess players had "critical thinking" in their blood. Their skills were simply enhanced. I can't prove that, however.

Those of us who have run school chess programs over the years know that a few students sent to the chess classes are there because the parents want babysitters in the afternoon when the school lets out or simply want their child to learn the basics of chess. They are unaware of the studies that show how much chess not only improves analytical thinking but also improves student performance in school courses. Unless you have Socratic like instructors who can challenge every student, they only learn how to move the pieces.

With teachers (not coaches) who can challenge, most of the students want to return. The program does not become, what I refer to as revolving door chess where your instructors teach the same material year after year to new groups of “recruits.” The students return and soon you have different levels of instruction to meet the needs of your little critical thinkers. Stated simply, you have thinkers not stinkers.

Some children get to a level of analyzing, knowledge, and chess skill with a love of the sport and art of the game where they continue to extremely high chess levels where they likely need and often obtain coaches. Weibel Elementary School, a public school limited to one neighborhood, has been blessed to have had several outstanding chess students in its 33year history and has fared well against private schools and open area public schools where they often have a very select group of students. Yet, for all levels of those who learn chess, our slogan says it all, “Chess is Forever!”

A few of the students at Weibel could even "learn" from a demo board talking head, one who seldom if ever looks at or questions/challenges the students, because they love analyzing and studying on their own. I have not kept demo board talking heads. OK, I lied, I did keep one at the school, Hans Poschmann, who you knew well. He was such a warm, loving, and bubbly person, perhaps personified in his playing only one chess opening, "The Orangutang."😂 Please don’t ask me to explain that. 🙃 Hans, RIP, without interacting with the students while always looking at his demo board, somehow brought something else to his students-humanity's warmth & love which I would argue is even more vital than critical thinking. 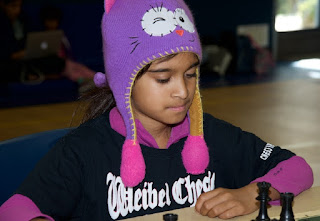 I am upset and sad to announce that Weibel Chess cannot begin next week as previously thought. The Parent Teacher Organization CPA advised the Chess Committee against hiring instructors even though the hiring and salaries would be paid by an outside individual with reimbursement from the PTO who would have collected the tuition. The PTO felt they had no choice but to withdraw the permits for they would have had to lay out a substantial amount of money without any knowledge if it would be refunded. The CPA did provide five other possible options. The Chess Committee had held off registration when the PTO, despite getting the go ahead from the Weibel School and the District, expressed concern about reimbursing that individual for the payroll costs and rightly decided to check with their CPA. I decided to wait before posting anything until the Chess Committee met and perhaps came up with a Plan B after discussing the five other options. Last night the Chess Committee decided to go with one of the other options. If this Plan B works, I will post the information. Based on an information sheet that was distributed, there should be no trouble in filling the 45 slots for the Club and the 45 for the Team.
at 11:38 PM No comments:

WEIBEL CHESS GETTING CLOSE TO RETURNING FACE TO FACE

The Weibel Chess Committee head, Kwee Kuntjara, just sent the following message from the Principal's newsletter: "Please be aware that no after school/group activities are allowed on school property after school hours (these require permits). No permits have been issued at this time. Thank you for understanding." If there are any changes that might provide us with an opportunity to restart Weibel Chess, I will post news on our Blog and our Facebook page:https://www.facebook.com/Weibel-Chess-213022428884018 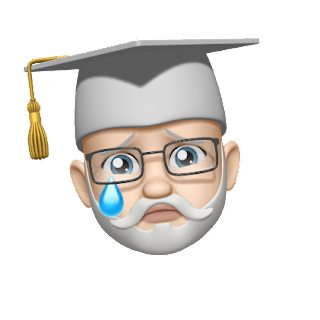